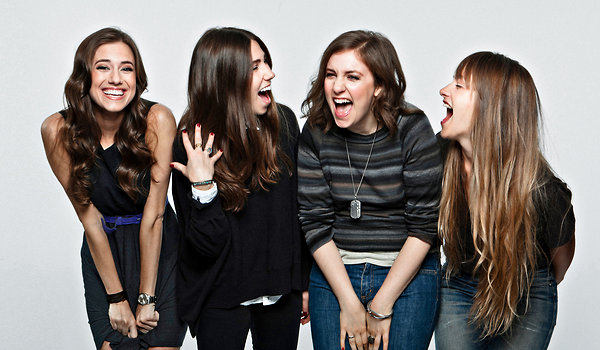 The cast from the HBO series “Girls” (Chad Batka/The New York Times), representing four out of 10 white Americans who clearly have no non-white friends.

A Reuters/Ipsos poll released last week reveals that nearly 40 percent of white Americans have zero friends of color. It’s unlikely that anyone with a basic understanding of modern-day race relations in this country is surprised by these statistics, but it’s still staggering to think that the closest interactions a large portion of US whites have with people of color is the media, where racist and dehumanizing stereotypes are typically reinforced, OR, like in the case of “Girls”, people of color simply do not exist.

Explicit policies of segregation may have been ruled unconstitutional a long time ago but, as many of us know, various forms of structural racism continues to confine a significant portion of people of color to their respective ghettos. This helps explain why 25 percent of non-white americans are exclusively surrounded by people of their own race, as well.

Still, segregation among white America is far more damaging to equality because of the way white privilege operates. Take employment opportunities, for example. Nancy DiTomaso, author of The American Non-Dilemma: Racial Inequality Without Racism, made headlines in March for her research on this very topic. (Huffington Post):

The way that whites, often unconsciously, hoard and distribute advantage inside their almost all white networks of family and friends is one of the driving reasons that in February just 6.8 percent of white workers remained unemployed while 13.8 percent of black workers and 9.6 percent of Hispanic workers were unable to find jobs, DiTomaso said.

“Across all three states where I did my research, I heard over and over again [white] people admitting that they don’t interact very often with nonwhites, not at work, not at home or otherwise,” said DiTomaso about the 246 interviews with working-class and middle-class whites she did over the course of about a decade in Tennessee, Ohio and New Jersey. Her research included detailed job histories and information about the way her study participants obtained jobs over the course of their careers.

“That was true for just about everybody unless they were still in college,” DiTomaso continued. “Others would allude to some college friend or experience. But since then, they had not had much contact with blacks.

This 21st century form of segregation also exacerbates education and wealth inequality, benefiting whites while hurting blacks the most.

According to a 2009 analysis by Elizabeth Oltmans Ananat of the Institute of Public Policy at Duke University, segregation “increases the ability of local government to transfer schooling resources from the black to the white community” and ” increases cities’ rates of black poverty and overall black-white income disparities.” Overall, “ghettoes appear to be bad for African-Americans and good for whites in terms of the individual outcomes of young adults.”

So, how do we fix this? One place to start is education, which has seen deepening segregation over the last two decades along both racial and class lines. Though the South has largely resegregated since the reversal of court-mandated desegregation in 1990, the North is not of the hook. A 2012 analysis of Department of Education data by the UCLA Civil Rights Project, found the most extreme levels of racial division in Chicago, New York, Detroit, Boston, St. Louis and Pittsburgh. The report’s authors say the best way forward is government policies that foster integration. Sadly, President Obama’s support for charter schools and mass school closings, much like his predecessor, deepens the racial divide. But communities most impacted by these policies aren’t taking it lying down. From Chicago to Philadelphia, students and parents are rising up to demand demand equal access to a quality education.

I don’t know about you, but the only way I see America’s racial divide changing for the better anytime soon is through school integration. Otherwise, if things continue as they are, we could be looking at an even more segregated future.

Had a great conversation with @aaronjmate about lesser evil voting, how we shouldn’t stop criticizing and pushing b… twitter.com/i/web/status/1294338086961328128