Originally posted at The Electronic Intifada

The publisher McGraw-Hill Education is destroying all copies of a political science textbook after receiving complaints from hardline supporters of Israel that it features a series of “anti-Israel” maps. 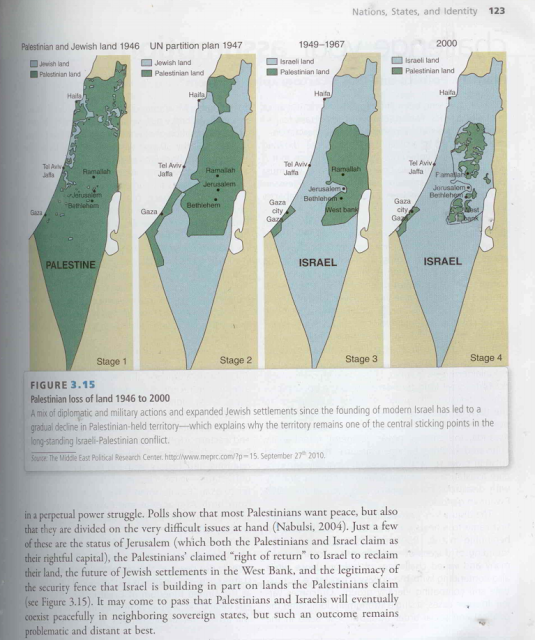 An image published by Elder of Ziyon from the textbook Global Politics, as part of the anti-Palestinian blogger’s successful campaign to pressure McGraw-Hill over maps depicting land loss in Palestine.

Within a week of the initial outcry, McGraw-Hill began destroying all copies of the book, scrubbed the book from its website, promised to reimburse anyone who bought the book and apologized to the offended right-wing bigots behind the manufactured controversy.

According to the publisher’s summary, the book fosters “critical thinking and theory” about global events and “offers students a number of lenses through which to view the world around them.”

The maps, which appear in chronological succession on page 123, show Palestinian land loss from 1946, one year before Zionist militias initiated the displacement of more than 750,000 indigenous Palestinians from historic Palestine, to the year 2000, by which point Palestinian land had been reduced to a handful of tiny non-contiguous enclaves in the occupied West Bank and a sliver of Gaza.

The caption reads, “A mix of diplomatic and military actions and expanded Jewish settlements since the founding of modern Israel has led to a gradual decline in Palestinian-held territory – which explains why the territory remains one of the central sticking points in the long-standing Israeli-Palestinian conflict.” The image is sourced to the Middle East Political Research Center.

Such maps present an enormous threat to Zionist ideologues because they have the ability to cut through Israeli propaganda that portrays Palestinian anger and violence as rooted in religious intolerance and irrational hatred rather than a natural reaction to Israel’s colonial expansionism, land theft and ethnic cleansing, all of which continue today.

That is why any time an iteration of these maps breaks into the mainstream, Israel’s advocates rush to censor it.

Just last year, when MSNBC aired a similar series of maps to demonstrate the dramatic theft of Palestinian land since Israel’s foundation, pro-Israel groups pressured the cable news outlet to retract the segment.

The first criticisms of the textbook came from the virulently anti-Palestinian and pro-settlement blogger Elder of Ziyon.

Elder of Ziyon’s blog post on the textbook, published on 1 March, urged supporters of Israel to flood McGraw-Hill with emails against the maps, denying, against all available evidence, that Palestinians were ever forcibly expelled from their homes in pre-planned acts of dispossession.

Within hours, the post was republished by The Tower, a self-styled Israel and Middle East-focused magazine and website run by The Israel Project.

TIP is a right-wing pro-Israel lobbying outfit that specializes in crafting and supplyinganti-Palestinian and anti-Muslim propaganda to journalists and policy makers.

Block gained notoriety for secretly coordinating a smear campaign against bloggers who were writing critically about Israeli government policy.

The Blaze, another right-wing media outlet, soon picked up the story and brought it to the attention of McGraw-Hill, which responded by immediately suspending sales of the textbook pending a review.

Elder of Ziyon celebrated and took credit for the outcome, noting that “the book is being or has been used in courses at Northwestern Oklahoma State University, University of Indianapolis, Western Illinois University, George Washington University School of Business and Marshall University.”

Less than a week later, McGraw-Hill announced it would destroy all copies of the book.

“The review determined that the map did not meet our academic standards,” McGraw-Hill spokesperson Catherine Mathis told Inside Higher Ed, adding, “We have informed the authors and we are no longer selling the book. All existing inventory will be destroyed. We apologize and will refund payment to anyone who returns the book.”

Inspired by anti-Muslim hate group leaders like Robert Spencer, Elder of Ziyon is dedicated to demonizing Palestinians and Muslims, and even argued that the paranoid manifesto of Anders Behring Breivik is “not all crazy sounding – it is scary how sane much of the document seems to be.”

“Some of [Breivik’s] political analysis is actually on target,” Elder of Ziyon stated after Breivik massacred 77 people in Norway, supposedly in an attempt to rescue Europe from what he viewed as the dark forces of Islam and Marxism.

Breivik drew inspiration for his violent ideology from the US Islamophobia industry of which Elder of Ziyon is a part.

Elder of Ziyon conceals his real identity, even when speaking in public.

The textbook’s authors – Mark Boyer, Natalie Hudson and Michael Butler – did not respond to requests for comment.

Asked who carried out the review of the book, Mathis told The Electronic Intifada that it “was conducted by independent academics who determined that the maps were not accurate.”

Mathis did not respond to a follow-up query seeking more details about who carried out the review and how they reached such a conclusion.

As for who pressured McGraw-Hill about the maps, Mathis would only say, “We heard about this from multiple sources.”

Given the highly politicized nature of all discussion related to Palestine in the United States, the definition of who is an “independent academic” would vary widely depending on the perspective of who is making the assessment. And if the “experts” are indeed independent, they should be willing to provide an explanation of how and why they deemed the maps to be inaccurate.

The only way that McGraw-Hill’s credibility can be assessed is with some transparency about the groups or “experts” who made this recommendation.

Otherwise, we are left to assume that McGraw-Hill is effectively burning books to placate the censorship demands of right-wing anti-Palestinian bigots.

The Trump administration is determined to get their war on Iran regardless of whether he wins the presidential elec… twitter.com/i/web/status/1321216592441651205

Where are all the libs who threatened to shut things down if Amy Coney Barrett was confirmed? All that tough talk a… twitter.com/i/web/status/1320907575697776640